Whether you gotta impress someone or for your own good mood – this apple cinnamon gin cider cocktail is a perfect choice!

I LOVE cocktail bars! Especially really good ones. Those who serve cocktails far from standardized classics. So – just for investigation 😉 – I have to try those drinks that I don’t know yet. Most of the time I end up slightly (or terribly) drunk and with a bar bill that kicks one out of the socks.

Hope you now understand the need for an “iDorisMag” special house cocktail. This one is neither complicated and of course not expensive. But what does make a great cocktail a great cocktail? What are the ingredients of a really good cocktail? A great drink is not simply defined by its ingredients but also by the special (secret) ingredients their order and the procedure of how they are mixed. This all gives the drink a special character. I’m sure you already saw the bartender’s bottles of homemade juices and syrups.

And it’s such a simple syrup that goes into this Gin Cocktail. Maple syrup, apple, cinnamon, and thyme make a super flavourful sweet syrup for this cocktail.

Apple and cinnamon – anyways one of the best all-time classic combinations. The syrup adds sweetness to the cocktail. By adding apples and apple cider the cocktail gets the fruitiness. Thyme adds its herbal flavor.

For a bigger round of your friends and family just multiply the ingredients and you can prepare and serve the cocktail in a jar! Or retro style in a bowl.

Squeeze the juice out of the lemon. Cut the apple into nice small pieces, put some of the pieces aside for decoration. Add apple pieces, syrup, thyme twigs, and water to a small pot and boil it. Stir continuously until the apple pieces get soft. Remove the pot from the oven and remove the thyme.

Sift the syrup and put the brew aside to chill out.

Fill 2 glasses with 5cl of finest gin of your choice. Fill in the apple syrup brew.

Fill the glasses up with the apple cider. Add some ice cubes and the nice apple pieces saved for decoration.

Pin this lovely apple cinnamon cocktail to your Pinterest board: 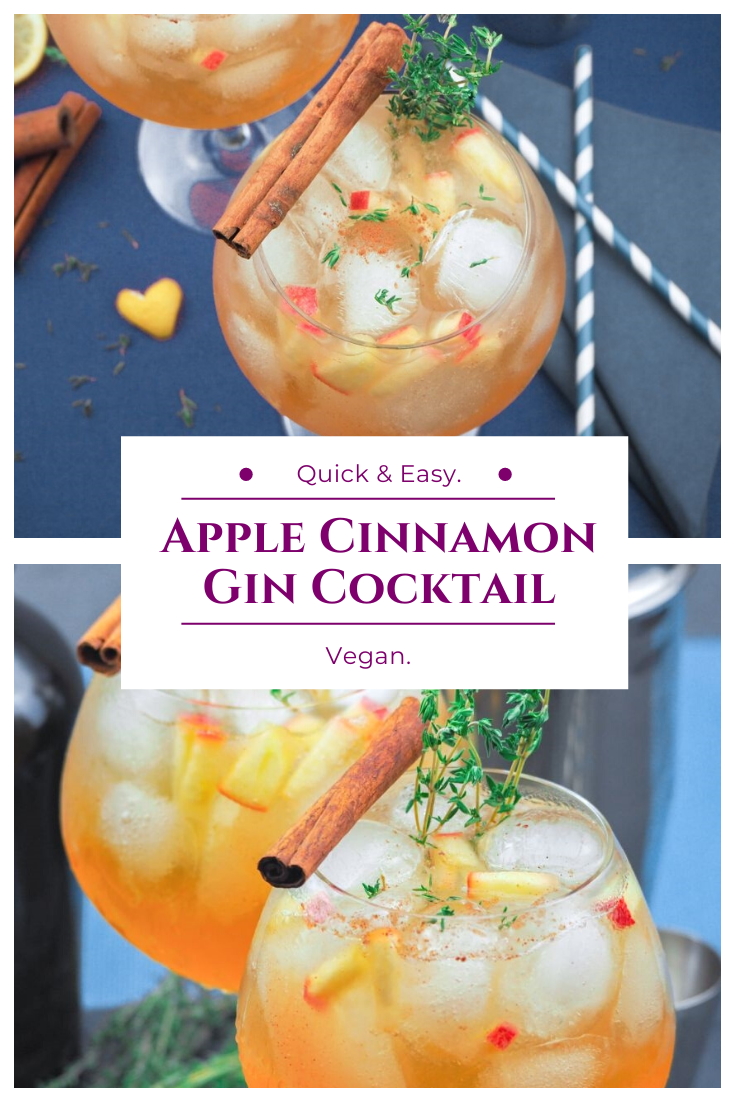 so good to have you here.
On this site, you will find delicious vegan recipes that are quick and easy to make.